We've been lucky enough to find a real diamond this week! The Holy Grail of Classic Mustangs. We have just finished snapping a few photos of this incredible vehicle as our new blog section was being completed so we've decided to write about it.

We're going to be making some really great posts via this little blog so don't hesitate to bookmark our page or sign up for the RSS Feed.

Now, about this car we mentioned.... 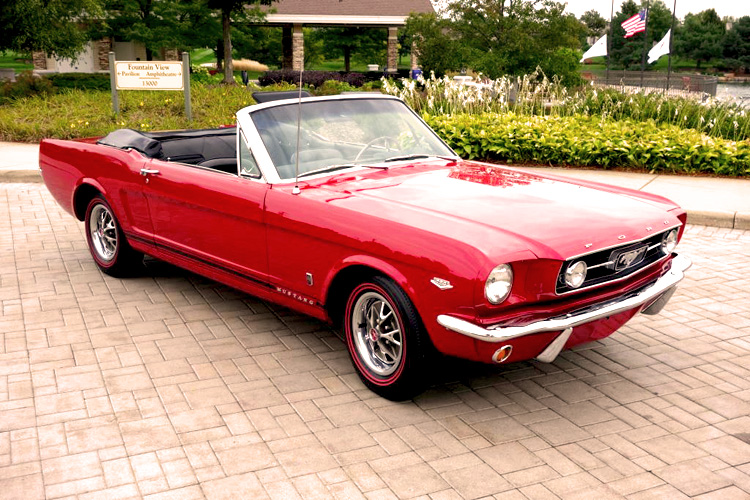 This rare and beautiful 1966 Ford Mustang GT Convertible, maintains its original fire breathing 289 Hi-Po V8 and is a TRUE FACTORY GT!  In 1966 Ford produced 3 different 289 V8 motors available for the Mustang. The major differences were horsepower and compression! Since all three of them had the same 289 cubic-inch motor, they were defined with an engine code as denoted in the 5th digit of the Vin Number;  Engine Code C (200Hp w/9.3:1 compression), Engine Code A (225Hp w/10:1 compression), and the BIG DOG - the 'K Code' - with 10.5:1 compression resulting in 271 horsepower (Horsepower was often underrated for insurance purposes). When you ordered the K Code it came from the Factory with a shorter warranty than the typical Mustang. K-Code buyers were looking at a 3 month or 4,000 mile warranty instead of the standard 12 month or 12,000 miles plan. We're assuming the folks at Ford figured most people who purchased the car would put it through its paces on a daily basis, and they were probably right. This particular K Code was obviously cherished and lovingly maintained.

The biggest question we hear is how does the K-Code engine differ from the other 289 engines featured in 1965-1967 Mustangs. This engine featured upgraded pistons, cylinder heads, carburetor, solid lifters, and heavy duty connecting rods. In addition, one look under the hood and you will notice the chrome air cleaner and valve covers. Oh, and we can't forget the “289 High Performance” lettering atop the air cleaner and fender badges denoting this HIGH PERFORMANCE Engine!  With an estimated 271 horsepower at its disposal, it was easy to tell this car from other 289 powered Mustangs of the day. The differences didn't stop there. In fact, the entire driveline of these cars were designed for performance. We're talking about a high-performance clutch, drive shaft, 9 Inch rear differential, and heavy duty suspension. It’s no wonder Shelby put this engine in his racing performance GT350 Shelby Mustangs. In fact, the first Shelby Mustang, the Shelby GT350R featured a modified K-Code engine.

These days collectors of the Ford Mustang look back fondly on the K-Code. They are highly sought after as they are increasing in value exponentially. Two recent sales for Fastback models were $70,000 and $90,000 at the Mecum Auto Auction this year (2013). What is a Convertible worth? We know we have something special and we are in the business to sell. Therefore, someone is going to get a deal!! Unfortunately, only a limited number of these vehicles were produced between 1963-1967. One percent to be certain, and that was for all body styles. Convertibles are less than one percent, 4 SPEEDS ARE EVEN LESS! If you own one, you own a valued piece of history. If you want one, join the club and buy this one before its gone! Most in are in the hands of collectors and likely never to be sold again!

Check out the video below where we do a quick walk-around.

We already have a winner with the 'K Code' status, but that's not all this stunning '66 has to offer. It is detailed to show quality TOP TO BOTTOM!  It's also backed by a Factory Original 4 Speed transmission sure to please the most discerning collector! Add the GT equipment package and you have one of the rarest Mustangs ever produced! This is a true investment and reference grade quality 1966 'K Code' Hi-Po Mustang GT Convertible! Available now only at National Muscle Cars.